Who Are the Green Lanterns of Earth? 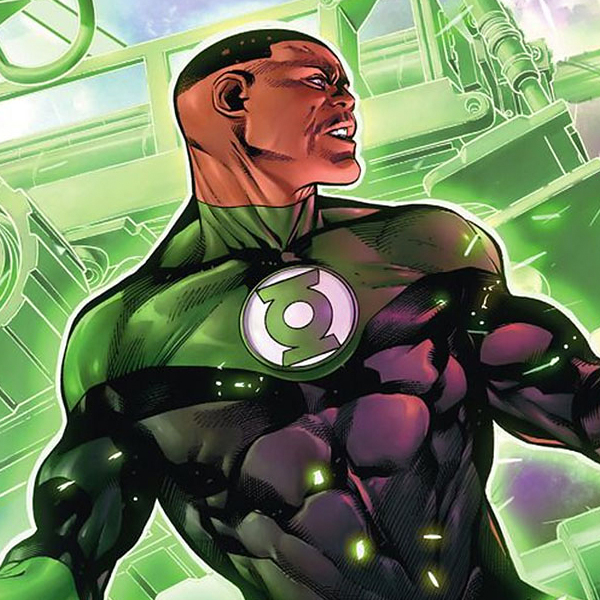 John Stewart was an architect and United States marine hailing from Detroit, Michigan. Because of his integrity, morality, and ability to resist great fear, he was selected as Hal Jordan’s backup Green Lantern (but only after the first backup candidate – Guy Gardner – was seriously injured).

Initially, Hal wasn’t a fan of John, considering him relatively nifty but extremely belligerent. Of course, the Guardians stood by their decision -- much to Hal’s chagrin – and granted John a Power Ring and portable Power Battery.

Stewart’s first mission initially fed Hal’s suspicions before alleviating them completely. Assigned to protect a racist politician, the duo clashed over Stewart’s ostensibly poor handing of an attempted assassination – during the attempt, John refused to intervene. Why? Because the African American assassin was a decoy utilized to empower the politician’s racist agenda. Before the attempt, John stopped a shooter from killing a police officer. After questioning the gunman, he learned the assassination was staged.

After presenting some evidence and an explanation, Hal determined John was an incontestably awesome Green Lantern.

When Hal Jordan was occasionally unavailable – or busy with “secret” missions the Guardians would never approve of -- John Stewart would happily fill the Hal-shaped void. Of course, being the back-up Green Lantern meant having to fulfill Hal’s other responsibilities, including his obligations to the Justice League.

When Hal finally – for real this time – relinquished his duties as Green Lantern of Earth, John Stewart was offered the position. Initially refusing, he was convinced otherwise by the beautiful (and incredibly stern) Green Lantern of Korugar, Katma Tui – she called him a coward, and John stepped up to the plate.

Katma, John’s new training officer, educated John in the ways of advanced ring slinging. Throughout their many adventures with the Green Lantern Corps, the two fell in love and were eventually married.

During DC Comics’ Cosmic Odyssey miniseries, he failed to stop the destruction of planet Xanshi – it was affixed to a massive bomb by an avatar of the Anti-Life Equation. You see, John became increasingly arrogant regarding his abilities. After a portion of the planet exploded, John utilized his ring to encase J’onn J’onzz in a protective bubble. Extremely sure of himself, John thought it best to leave J’onnz inside the bubble and move him away from the battle – a Green Lantern could handle the avatar alone. After discovering the avatar’s bomb, John was shocked, stupefied, and frozen with fear – the bomb was yellow.

Powerless to stop it, the planet exploded. Moments later, and still encased in Stewart’s green, protective bubble, the Martian Manhunter shared a few choice words with the egotistical Lantern: “Thanks to your arrogance and stupidity, I have now seen two worlds die. I will never forgive you for this.”

This tragedy (and a few others) left John Stewart a broken man on the verge of suicide. Unfortunately, his fractured mental state allowed an insane Guardian of the Universe to infiltrate his mind and draw him back to OA.

Yes, a super-powerful Guardian of the Universe went absolutely bonkers – he turned OA into a patchwork planet of sorts, collecting cities from other planets and arranging them along OA’s surface. And yes, they were in close proximity to one another, so unfamiliar species were consistently butting heads.

After the mad Guardian was defeated, John remained on the patchwork planet and maintained order between the terrified alien species – his architectural brilliance and intuitive thinking allowed him to build a functioning, semi-cooperative society out unspeakable trauma.

During his time on “Mosaic,” John started to evolve and eventually became the first mortal Guardian of the Universe – they called him “The Master Builder.”

Unfortunately, during the events of “Emerald Twilight, “ Guardians were killed and the Central Power Battery was destroyed. This culmination of atrocities stole John’s newly acquired powers and imperiled Mosaic.

Because you’re already familiar with the Guardians of the Universe, I need to introduce you to another sect of Maltusians who, unlike the Guardians’ desire to contain evil, decided to focus their immense power on smiting it completely.

Naming themselves “The Controllers,” this sect of Maltusians decided to create their very own intergalactic agency, aka, “The Darkstars.” Were they granted Power Rings, Power Batteries, and an infuriating oath? No, the Darkstars were granted powerful exo-suits (specifically, “exo-mantles)” powered by The Controllers’ vast energies.

Following the initial events of Emerald Twilight, when a Parallax-possessed Hal Jordan killed 99.9% of the Guardians, massacred and de-powered the Green Lantern Corps., and destroyed the Central Power Battery, The Controllers recruited John to command the Darkstars. Accepting the offer, John used his new powers and resources to save the various species inhabiting Mosaic.

John served the Darkstars with distinction until he was crippled by the previously unknown son of Darkseid, Graven.

During DC’s Final Night event, and before Hal (aka, Parallax) sacrificed himself to stop the alien, sun-consuming Sun-Eater from consuming -- that’s right -- the sun, Hal granted Jon his mobility.

During the ‘Sinestro Corps War’– a conflict with Sinestro and his fear-powered Yellow Lanterns -- several Green Lanterns were killed by an almost imperceptible, long range assault. Meet Bedovian, the Yellow Lantern’s sniper who could totally hit a target from a distance of three Space Sectors.

Using his ring, John scanned nearby sectors and discovered the Lantern nestled inside a red Sun-Eater. John – a skilled marine sniper – crafted his very own scoped rifle and mitigated the threat.

During ‘The Blackest Night’, John visited the massive gravesite of planet Xanshi. While visiting/commiserating/lamenting, a thousand black rings flew into the planetary debris and reconstituted the planet.

Descending to the planet’s surface – which was a TERRIBLE idea – John was confronted by the entire, newly zombified citizens of Xanshi; they were brought back as Black Lanterns by the aforementioned rings.

Although the Black Lanterns were innumerable –the taunting hollow shells of John Stewart’s biggest failure – he managed to flee the planet. And that was a good thing, considering ‘Black Xanshi’ was moving towards Earth with a MASSIVE army of Black Lanterns looking to subjugate life and summon Nekron.