Who’s Grant Morrison, and why should I give two-thirds of a freshly baked sh*t????

If that’s seriously your question, then you need to grab a fist full of psychedelic mushrooms, turn the lights down, wear a mining hard hat with working head-lamp, and read a copy of Grant’s seminal, subversive work from DC’s Vertigo line, The Invisibles.

Now that you’re finally aware of time’s liquidity and the eternal struggle between universes representing absolute order and chaos (and the unfortunate middle ground upon which they struggle – our universe), you might be ready for another Grant Morrison classic – Doom Patrol.

Yes, Doom Patrol was like the Fantastic Four on acid – really bad acid that led to irreversible psychosis. You See, Doctor Niles Caulder surrounded himself with more “freakish” super-people to bring about a greater good. Unfortunately, the tragic origin stories that “gifted” these heroes with extranormal abilities were purposely instigated by Caulder.

So, you have psychologically scarred super-people trying to maintain their tenuous sanity while combating the god-like, other-dimensional butterfly collector “Red Jack” and the living art silhouette “Mr. Nobody.”

Look, what I’m telling you is this: Grant Morrison is brilliant, and Green Lantern is in good hands.

“The basic concept is that [Hal Jordan] is like a space cop that patrols a sector of the universe where anything can happen. We’ve made it more like a police procedural… It’s an intergalactic police force, but instead of guns they’ve got wishing rings that make their thoughts come true and turn into plasma… "

So, a police procedural where serious crimes are mitigated with hard-light forensic devices and perhaps, eventually, a giant green F-16 Tomcat.

Sorry, Grant. You were saying?

“We’re doing Hal Jordan where, you know he’s a good cop, but is he really a good guy? And we’re looking into his relationships and how he deals with people. And also the fact that, if you’ve got a job as a space cop, it’s hard to be stuck on the planet Earth. He has other lives on other planets. We’re gonna’ be looking into a lot of things that I don’t think we’ve seen a lot with Hal Jordan before.”

Holy crap. Does Hal…bend the law? Is he…on the take? Yes, Hal gets the job done, and he flashes a gleaming, confident smile, but HOW does he get the job done? Are his means…questionable?

Damn you, Grant! You just added more layers to Hal Jordan in a single interview than most writers add in 40-issue arcs!

Anyway, I’m buying this, and so should you. However, I’m not just buying this for Grant Morrison’s writing (although that’s certainly reason enough) – I’m also buying it for the illustrious illustrations of Liam Sharp.

Can Liam keep up with the maddening machinations of our epoch’s greatest comic book writer? Oh, yes. Absolutely.

Here’ s a few pages to drive the point home: 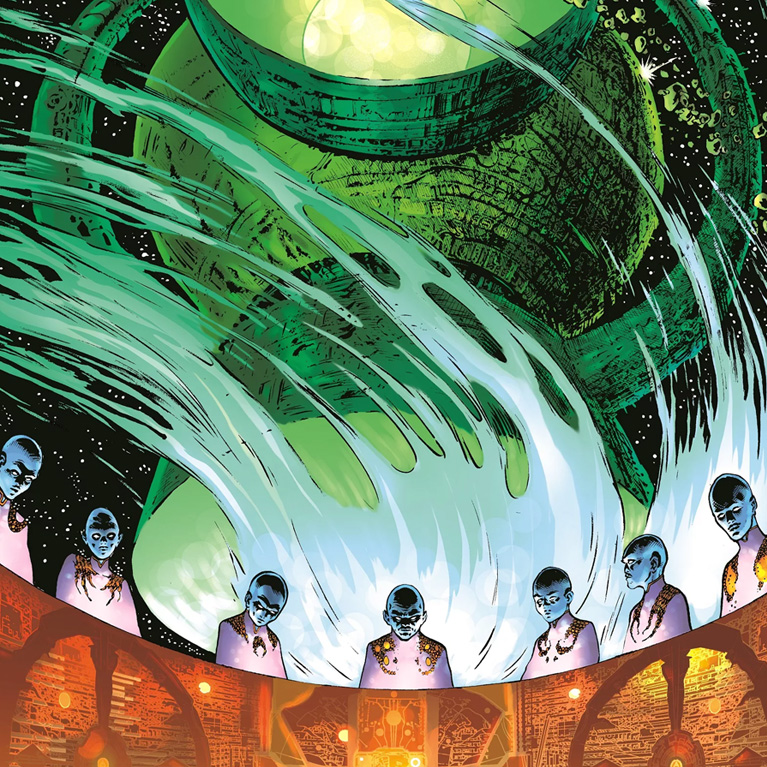 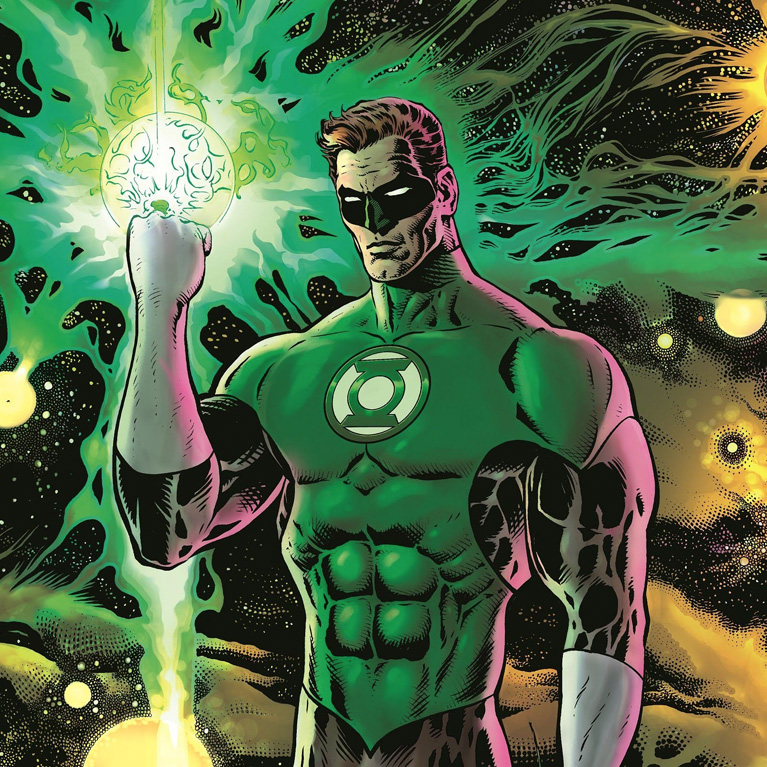 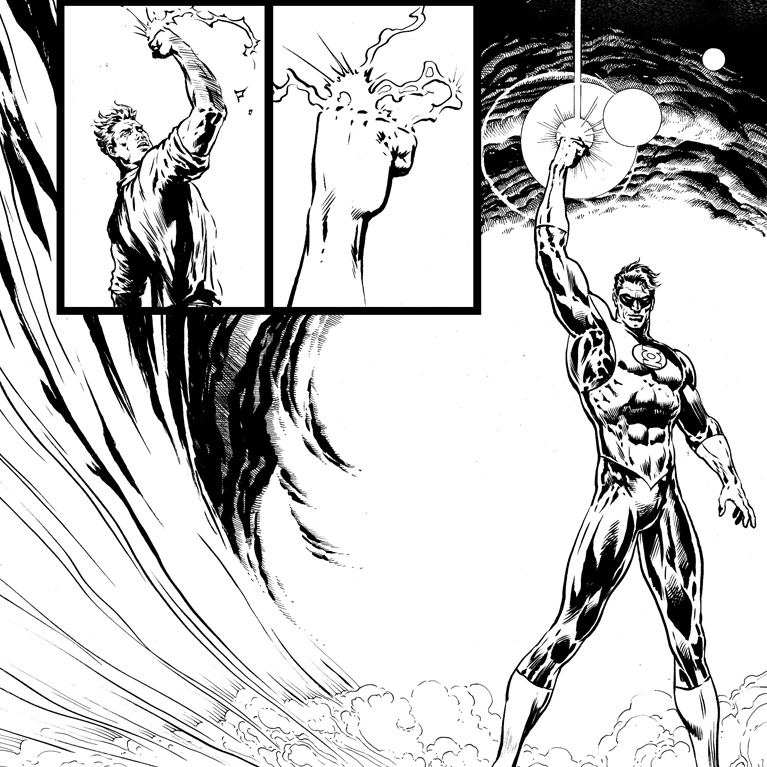 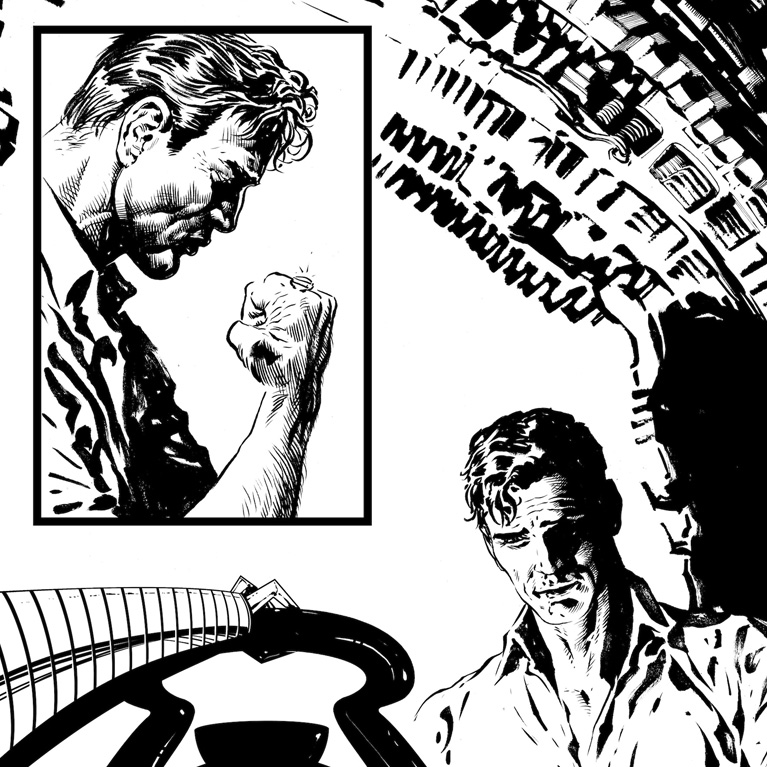 Honesty, this series can’t come soon enough. Grant’s an amazing writer, and Liam Sharp is….wow. If you’re looking for a Liam primer, check out his work on Wonder Woman during the initial REBIRTH issues. I mean…hoooly crap.

Excited for the new Green Lantern series? We certainly are, but not Hal Jordan. He’s not a fan – at all -- of someone tagging along. He brings up valid safety concerns, but prefers to avoid questions regarding suspiciously thick envelopes exchanged for illegal alien psychedelics.