Green Lantern » Who Are the Blue Lanterns? 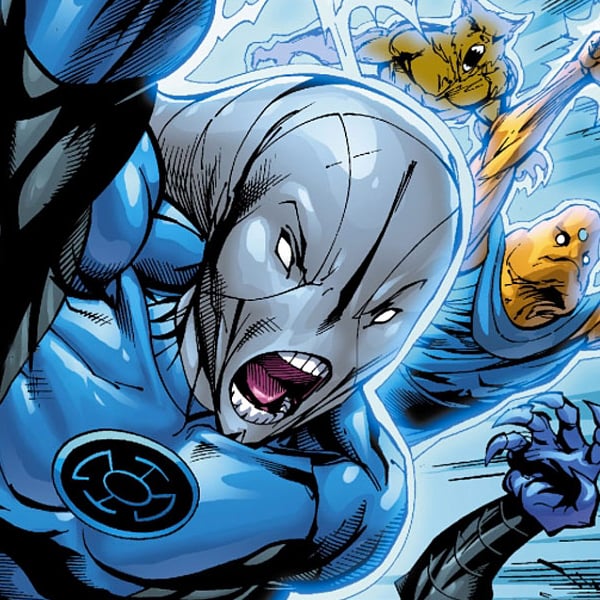 “WHO Are the Strange, Terrifying, and Utterly Ghastly Alien Lanterns Representing the Rest of the Emotional Spectrum?”

Who Are the Blue Lanterns?

Much like a Green Lantern draws, chambers, and harnesses the coalesced (and very green) willpower of all sentient beings, the ring-bearing Blue Lanterns draw their own emotionally charged energy from the Emotional Spectrum – the blue power of Hope.

Yes, the Blue Lanterns – one of seven Lantern Corps representing color-specific energy fields making up the Emotional Spectrum -- are empowered by the coalesced hope of all sentient beings.

How did this very helpful and extremely supportive Lantern Corps come about? Well, it starts with a resurrection. Correction: several resurrections.

The Return of The Guardians

As previously mentioned, Hal Jordan was possessed by the yellow Fear Entity, Parallax. And, during his possession, he not only destroyed the Central Power Battery, but murdered every single Guardian (except for Ganthet. Yay, Ganthet!).

Before Hal sacrificed himself during The Final Night, he was approached by another Green Lantern, Kyle Rayner, who begged Jordan to help their imperiled home world. And, after said sacrifice, Kyle absorbed Hal’s remaining ring energy and hosted the power of ION, the Willpower Entity (Right – the physical manifestation of universal willpower).

Deciding to forgo the dark path of his mentor-- and before he decided to relinquish his omnipotence – Kyle utilized this great power to recharge the Central Power Battery and resurrect the Guardians of the Universe (well, he brought back younger versions with a few females thrown in to interject love and compassion).

The surviving Ganthet and a female Guardian, Sayd (who reverted to adult form rather quickly), were exiled by the Guardians due to the pair’s rampant individuality. Filled with hope for the future, and wanting to express said hope across the universe, the pair took up residence on the planet Odym, created a conduit to the blue field of the Emotional Spectrum (aka, a Power Battery), and created the Blue Power Ring to arm their new acolytes with the power of HOPE.

How Does One Become a Blue Lantern?

Well, it’s certainly not a simple process. Firstly, unlike the Green Lantern Ring that chooses a successor in a matter of seconds, the most recently recruited Blue Lantern takes 3 days to choose another wielder. Afterwards, the potential recruit is escorted to Odym where the responsibilities of a Blue Lantern are imparted to them at great length. If they agree to give themselves to the universe – to the terms and conditions of wielding such great power – the Guardians grant them a blue Power Ring.

The Green Lanterns were “introduced” to the Blue Lanterns while transferring a very dangerous prisoner to the planet Korugar for a scheduled and well-deserved execution – and yes, I’m talking about Sinestro.

During transfer, they were ambushed by another Lantern Corps—the aggressive and very dangerous Red Lanterns fueled by the coalesced rage of all sentient beings. The Red Lanterns infected Hal and his Green Lanterns cohorts with pure, overwhelming anger. As they struggled to combat the Red Rings’ crippling influence, a singular Blue Lantern appeared and, using his ring, purged the Green Lanterns of pure, poisonous, and weaponized hatred.

You see, a Blue Lantern’s power expresses itself in unique and wondrous ways – its constructs are based on the psychosis of anyone they’re trying to heal. In the case of a rage-obsessed John Stewart, he was presented with the image of his deceased wife, Katma Tui, who helped cleanse John physically, emotionally, and spiritually.

So, who was this glowing blue marvel with the mystifying Power Ring? None other than Saint Bro’dee Walker, the very first member of the Blue Lantern Corps.

After saving the contingent of Green Lanterns, Walker accompanied Hal back to Odym. Hal, somewhat skeptical, lost said skepticism after being introduced to the leaders of the Blue Lantern Corps – his old friend Ganthet and his companion Sayd.

While exploring the planet, catching up with Ganthet, and learning about the Blue Lanterns, Hal accidentally walked too close to the Blue Power Battery. You see, a Blue Lantern’s power seriously supplements a Green Lantern’s Power Ring – like, we’re talking 110% supplementation. But, if a Green Lantern ring gets too close the Blue Power Battery -- a physical conduit to the pure, collected hope of all sentient beings – the ring will immediately overload, explode, and perhaps cripple or kill the unfortunate Lantern. Hal managed to step away from the Battery before any exploding or crippling nonsense occurred.

How Powerful Is a Blue Lantern?

Well, there was a planet facing destruction due to a local, dying star. Utilizing the collected hope of the imperiled civilization, two Blue Lanterns were able to de-age the star, thus ending the impending threat.

Still curious about the Blue Lanterns? Then follow their adventures in the pages of DC Comics!

Until then, be sure to check out our continuing, enthralling history of the Emotional Spectrum’s heroic acolytes!